Characters of the Haunted Hayride 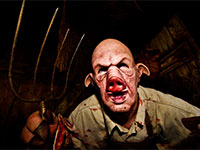 Hard at work in the Slaughterhouse found on the Field of Screams property, Willie takes is love of slaughtering to a whole new level. Known to have some of the best tasting pork products around, locals have accused WIllie of feeding his hogs with human meat. Beware as you travel through the Slaugherhouse on the Field of Screams Haunted Hayride as Willie and his band of pig brothers will see if you are good enough to feed to their brood. 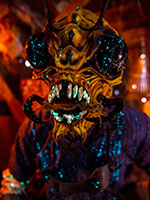 Inside the Conservatory along the Haunted Hayride path lives Venom. He has experimented with all types of insects and rodents and is responsible for turning the Conservatory in to a living nightmare for all who enter. Venom’s creations will feast on the blood and bodies of all who get trapped inside of this dilapidated building along the hayride path. 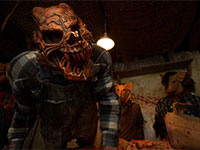 Drawn to the smell of fresh meat and blood, Beast is often found prowling around the grounds of the Slaughterhouse. He takes care of all of the scraps and helps Willie the Pig Butcher leave no evidence of any wrong doing. If Beast is spotted, you are warned to remain as still as possible. Playing dead is the Beast Dog's favorite game. 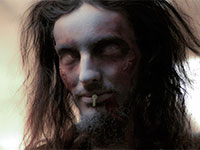 The dead are coming back to life as you are driven through Deadwood Cemetery. The slow pace of the wagon allows just enough time for these flesh eating zombies to rise from their graves and devour you one limb at a time. Soon enough, you will become one of them. 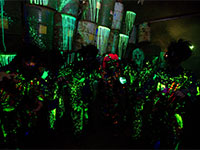 Documents recently declassified from 1962 report a toxic spill occurred in Mountville, PA that resulted in the death and disappearance of 30 government employees. The spill occurred due to employee negligence; the wrong valve was opened and dumped tons of radioactive waste into the Mountville water system. In addition to the first catastrophe, the clean-up party was not thoroughly trained and accidentally spread the toxic waste, contaminating themselves and their camp. Pages of the report have gone missing and it is unclear as to how, specifically, these workers died. Some speculate that the radioactive waste ate away their flesh and disintegrated their entire bodies. Some say it caused an awful sickness that left the men in a zombie-like state.

Bitter, Sour, Psycho, and the Band of Misfit Clowns 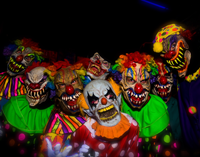 These clowns aren’t your every day birthday clowns. These clowns don’t play well with others. These clowns won’t just clown around with you, they will maim you. Evil, mean and bitter from being banished from the circus, these clowns are happy to have found each other. Now they have formed their own circus where they feel that they fit right in – THE PSYCHO CIRCUS. 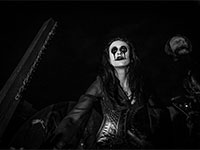 Who says that operating the guillotine is a man’s job? Led by The Executioness, this troupe of sociopathic executioners enjoy every second of their job. Surrounded by the bubonic plague, they are somehow immune to the disease. They torture all, small and large, young and old, diseased and healthy, it doesn’t matter. They show no mercy, they will poke, prod, burn and maim with a gleam in their eyes. The persecuted have committed crimes ranging from failure to pay chicken taxes to murder but they all get the same punishments…it’s just more fun that way. Judgment has been made and all must be punished. 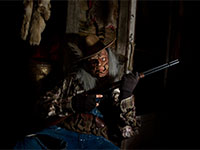 Living by his own rules, Dirty Dan cannot be trusted or contained. He will turn on you in a heartbeat, take everything you own without hesitation or a conscience. Dirty Dan does not take kindly to those trespassing on to his land and will not hesitate to use force to drive those varmints off of his property. An encounter with Dirty Dan is dangerous to say the least. Not many leave unscathed by his fury. 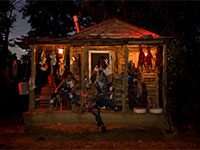 Meet the Clumpitts – Pa, Tick-Tick, Junior, and Uncle Bubba. After generations of inbreeding in the back woods, this family is barely even recognizable as humans. The only thing more precious to them than their moonshine is skinning alive any living creature that steps foot on to their property.

The Caretaker of the Field of Screams property, Isaac often trolls the swaying rows of the cornfields undetected. He is always watching his prey, attacks whenever he feels the urge, and is never heard. If you feel eyes on you as you pass through the cornfield or feel a warm breath on the back of your neck, chances are that Isaac Ichabod is very very near.