Meet the Characters of the Den of Darkness 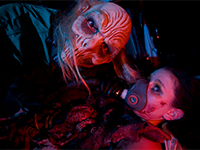 Known for practicing experimental and meaningless operations on his patients in order to test their pain threshold, he shows no mercy and knows no limits. Infamous for inventing crazy, meaningless experiments, just to see what would happen, patient reaction to certain pain stimulus' was a favorite of Dr. D. Sable’s. He would begin by severing a body part, recording the actions the patient was exhibiting, then continue to sever another body part, say a whole leg or just a hand, and see if the reaction was greater or less. The Doctor was curious to see as to how long the average person could withstand these pain stimuli until falling into shock, and then ultimately death.

Often found in the boiler room of the Den of Darkness, Harry is the kind of guy that everyone describes as being a little strange. He keeps to himself and to his work. No one dares enter into the bowels of the boiler room for fear of meeting up with Harry and what they may find there. Beware not to take a wrong turn in the Den of Darkness and end of in this room with only one exit! 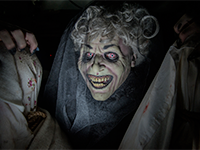 Scorned from the loss of several husbands over the past decades, the widowed bride will invite you inside the dark chambers of the Den of Darkness. Who will she marry next? Who will be her next victim 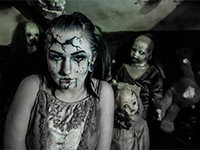 Deep inside the Den of Darkness lies the hidden doll room. Tucked away and rarely visited, these dolls are wicked and are ready to curse all those who enter. They are at the mercy of the Doll Maker and Annie follows orders very well. 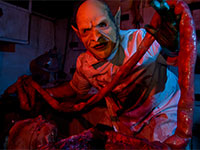 Locking himself in his morgue, Barnabus retreats into his own sick and demented world. Although the bodies are already stiff and cold, this creepy mortician tries to breathe life back into these still corpses. In a twisted playful manner, Barnabus is often found meddling around with various body parts and internal organs of his patients.

The second generation psychopath, Letch Jr. grew up watching his father maim and mutilate his victims with his favorite tool of choice – the sharpened teeth of the chainsaw. The smell of burning gasoline and the vibration of the engine, ignite a fire in Letch Jr. Often found hiding out in the meat locker, Letch Jr. is a force to be reckoned with. 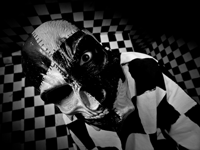 Simon, the arsonist, was an escaped inmate from the Applegate Asylum. His is suspected of setting the fire that destroyed The Garden Hotel. After the fire, Simon’s body was found melted to the vinyl tiles of the kitchen floor. When crews came back to remove his body, it was no longer there. Foul play was suspected but never confirmed. 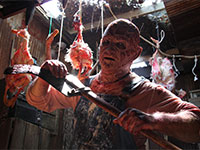 Cletus was a dedicated and happy cook but didn’t have the refinement that the owners were looking for. He enjoyed cooking animals in all shapes, forms and varied levels of decomposition. Cletus’ lust for experimenting with his recipes took a despicable turn when he cooked his first stew made with human flesh broth and corpse meat chunks. Dinner is served! 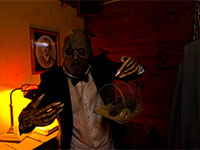